Jamaica Rivers - With their beginnings in the mountainous areas, Jamaica's rivers are many and varied - they can be found throughout the island from different points and destinations on their way to the Caribbean Sea.

The Alligator Pond River is a bathing spot a couple of miles west of Alligator Pond village off the road leading to Port Kaiser in the parish of Manchester.

The Black River is one of the longest rivers in Jamaica. It runs 53.4 km (33.2 mi).  It was considered to be the longest until it was discovered that the Rio Minho was longer at 92.8 km.

Its name refers to the darkness of the river bed caused by thick layers of decomposing vegetation. Over 100 species of birds have been recorded in the Black River morass

The Cane River rises at twin sources in the vicinity of Derby Peak in Eastern St Andrew at Bull Bay in the parish of Saint Andrew from where it flows south to the Caribbean Sea.

The Great River is one of Jamaica’s major rivers and forms the boundary of the parishes of St James, Westmoreland and Hanover.

The Guava River rises just north of the Grand Ridge of the Blue Mountains on the border of Portland St Thomas Jamaica.  From here it runs east then north and then east again to its confluence with the Rio Grande.

The Martha Brae River is  is located in Trelawny Parish on the north coast of Jamaica, towards the western edge, about 6 miles south of Falmouth, Jamaica.

The river features rafting. A small village west of the river is named Martha's Brae after the river.

The source of the Rio Cobre is unclear on the best map available; the headwaters being a writhing of unnamed, seasonally dry tributaries. The highest of these rise just above the 1,750 feet (530m) contour. From here it flows to meet the Caribbean Sea in the northwest corner of Kingston Harbour.

Its most significant feature is perhaps the gorge through which it runs between Bog Walk under Flat Bridge and northern Spanish Town in St Catherine.

The Rio Grande is a popular river of Portland parish Jamaica.  It was named when the Spanish occupied Jamaica in the 15th and 16th centuries.

One of the largest rivers in Jamaica, it was named "Big River" (Rio Grande) by the Spanish, and today is one of the many tourist attractions in Portland, mainly for rafting.

The Yallahs River is in the parish of St Thomas Jamaica.  Major landslides have developed in the Upper Yallahs River Watershed. As a result, the river carries a greater silt load and scours its banks far more quickly.

The area of Yallahs got its name from Captain Yallahs, a 1671 privateer who loved the area and visited frequently.

The Stony River rises just north of Coopers Hill in Saint Catherine Parish Jamaica.   From here it flows primarily north until it reaches its confluence with the New River.

The YS River is a river found in the southern parish of St Elizabeth Jamaica. It and feeds the famous YS Falls, a popular tourist attraction near Middle Quarters. 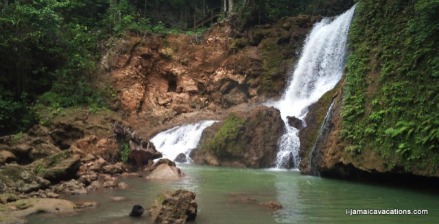 The Plantain Garden River is a river in the parish of St Thomas Jamaica. It is the only major river in Jamaica that does not flow in a northerly or southerly direction.

Jamaica Rivers - One Eye River is a tributary of the black River and runs in the parishes of Manchester and St Elizabeth.

Information on this page courtesy of wikipedia